Notes from the desk of Shane Dunne, software development consultant

Downloading the JUCE library is straightforward, but knowing where to put it, and other items such as SDKs, is not. Basically, you have to run the Projucer program and hunt around before you can find out what the default folder locations are. On this page, I spare you that by showing you in advance, so you can make informed choices.

If you haven't already installed JUCE, go to https://www.juce.com and hit the “Get JUCE” button at the top of the page. This will take you to an information page that explains Roli's licensing options, with “download” and “purchase plan” links for the various choices. If you're just beginning to explore JUCE, you can simply choose the “download” link at the bottom of the “Personal/Free” column, which takes you straight to the Downloads page. Click the appropriate button for the platform you'll be starting out on: Mac, Windows, or Linux. These instructions were prepared using Windows, but the other platforms will be very similar.

All three download buttons will put a .zip file into your Downloads directory, the contents of which differ only very slightly from one platform to the next. I did my downloading in August, 2017, shortly after the release of JUCE “Huckleberry” version 5.1; if you're reading this page much later, there might be a newer JUCE release with slight differences from what's shown below, but the basic structure is likely to be the same.

When I opened up the file juce-huckleberry-windows.zip (I used 7-Zip, but any other archive manager, including the default one built into Windows, will look about the same), I saw that the zip file contained exactly one folder, called JUCE, whose contents look like this:

Where to put the JUCE folder (and others you may need)

You can unzip this JUCE folder wherever you wish, but it would be nice to know in advance what the default location is. That doesn't seem to be written down anywhere, but I'm going to give you a sneak preview here, so you don't have to install the software in some random location in order to find out it wasn't the right one. So, just leave the JUCE .zip file alone for the moment and follow along.

The Projucer is going to need to know the location of several important folders, including some related to JUCE itself, and others which are SDK's (software development kits) needed for developing various kinds of audio plugins. Let me spare you the suspense, and just show you the default folder locations on all three platforms: 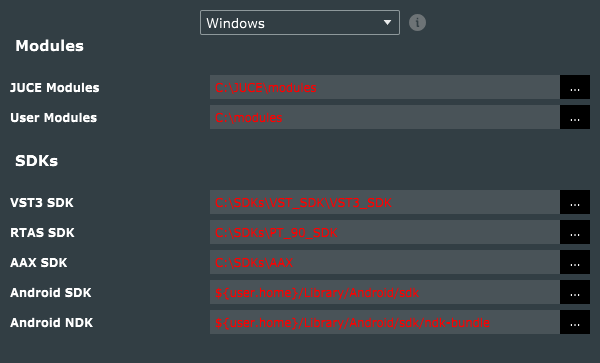 The default settings all show in red above, because I hadn't yet put anything in the default locations on my PC when I took this screenshot. 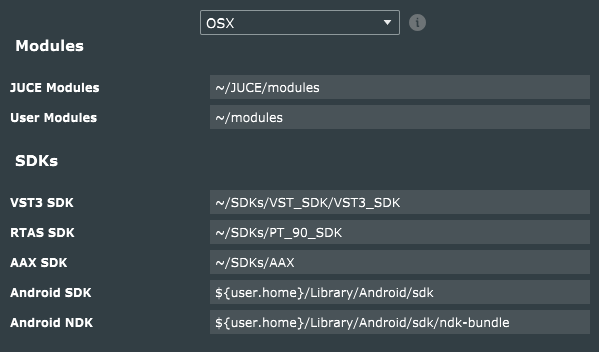 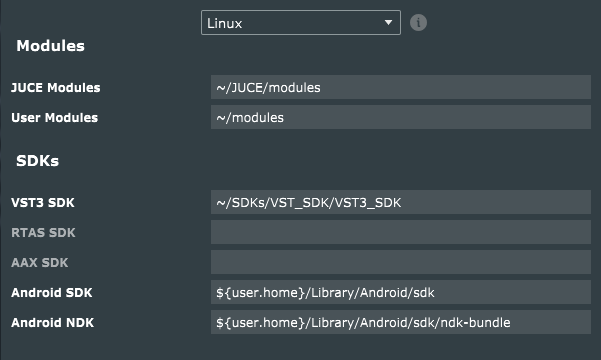 The JUCE Modules folder is the one called Modules inside the main JUCE folder, so unless you plan on moving it it out of there, the default place for the JUCE folder is clearly:

Furthermore, by default at least, the Projucer also expects to find another folder called SDKs right beside the JUCE folder, and this is another little hurdle you'll have to jump, which I'll get to in a moment.

User directories are a fine place to put things like SDKs on Linux and Mac OS, so I recommend you put your JUCE folder in your user directory (aka ~) on those platforms. If you're OK with putting the JUCE and SDKs folders in the root of your C: drive on Windows, go right ahead. I personally chose to put things in different locations on my Windows PC, as shown here: 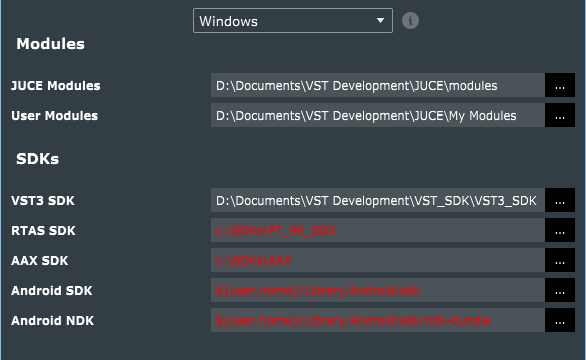 Note the paths for the RTAS, AAX, and Android SDKs are shown in red, because these are the default locations, and I haven't actually installed them on my PC.

Running the Projucer for the very first time

Wherever you decide to put the JUCE folder on your system, navigate to it and you'll see the icon for Projucer.exe (it will be called simply “Projucer” on Mac or Linux), which you can double-click to open the Projucer application, but be prepared for a series of opening hurdles which are described on the next page.

Except where otherwise noted, content on this wiki is licensed under the following license: CC Attribution 4.0 International